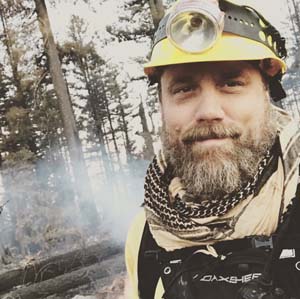 Saturday May 4 at 5:00 PM Sean Davis presents Oregon Wildland Firefighting.   Sunriver is surrounded by forest, with the Deschutes National Forest forming the northern and eastern boundary.  Paying attention to the risk of fire behooves us.  Sean Davis knows quite a bit about fire, he spends summers fighting fires. The rest of the year he teaches college classes in writing and literature.

Fire season has been increasing, with deadly fires rampaging across the west.  To the north, south, west and east of us major fires have raged.  2017’s Chetco Bar fire consumed 191,000 acres along Oregon and California ‘s western border. In 2011 the High Cascades Complex Fire burned 108,000 in the Warm Springs Reservation.  In 2006 the South End Complex fire burned 117,000 acres in the Steens Mountain area. In 2002 the Toolbox Complex fire burned 120,000 acres near Silver Lake. In 2002 the Biscuit Fire consumed a half million acres in Southern Oregon and Northern California. And these are just a few of the larger fires in Oregon.  I remember the smoke being so bad in 2017 that some people planning to attend Craig Johnson’s event for his newest release in the Walt Longmire series had to stay home due to their physician’s concerns over air quality.  Fire is something we need to pay attention to and avoid.

Davis describes what it is like to be surrounded by a wildfire.  “Then, there is a wall of flame in front of you, and it is fifty feet tall. No – not a wall of flame, because a wall is static. The fire thrashes, roars and consumes everything in its path.  It surrounds you on both sides. Now you struggle for breath. Greedy and unbelievably big, the fire steals the air from your lungs. You back away because the heat is unbearable, but now it circles your patch of dirt, and there’s nowhere to go to make it stop.”   Firefighters die fighting wildland fires.  Brave men, tragic to lose.

Living so close to forest, the preferred fuel for fires, it is smart to be aware of the causes and ways to avoid fire.  Oregon Wildland Firefighting delves into the causes of wildland fires, 90% are caused by humans.  The Columbia River Gorge used to be one of the most gorgeous scenic areas in the USA, until a teenager played with firecrackers.

Davis explains the process of firefighting, the brutally long days, the intense heat, the danger.  He details the agencies involved and the protocols for fire crews.  There are amazing color pictures, rather frightening.

Join us for an informative presentation about this clear and present danger.  There will be refreshments served and drawings for prizes.  Sign up to attend by emailing sunriverbooks@sunriverbooks.com , calling 541-593-2525 or stopping by Sunriver Books & Music.