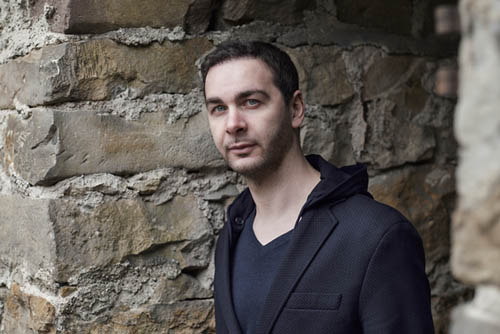 Saturday April 6 at 5:00 PM we are honored to present Pierre Jarawan for his extraordinary novel, The Storyteller.

Lyrical prose, characters that claim your empathy, and an intriguing plot prove Pierre Jarawan is a gifted story teller.  Samir’s family fled war torn Lebanon for a new safer life in Germany.  His father, Brahim, would tell stories of his homeland, stories that connected young Samir to a past he does not know. Memories of his father are the stories he told, stories of yearning set in a land that holds their history, a land they left for new lives in Germany.  Brahim is an affectionate father, a cheerful man who was always up for a party, a song, the company of friends or strangers.  Sadness would burden him, memories a catalyst for despair. Samir adores his father, so deeply that when Brahim disappears, Samir follows to the only destination he can conceive, Lebanon.  It is a dangerous journey to a land he knows only through his father’s stories, there he bears the cost of discovering the secrets of the past.  A beautifully written saga of a troubled land.

Pierre Jarawan resides in Munich.  He was born in Aman Jordan, his mother is German, his father Lebanese.  His poetry has won many awards, The Storyteller proves his novels should also find acclaim.

Refreshments will be served and there will be drawings for prizes.  Sign up to attend this free event by emailing sunriverbooks@sunriverbooks.com calling 541-593-2525 or stopping by Sunriver Books & Music.