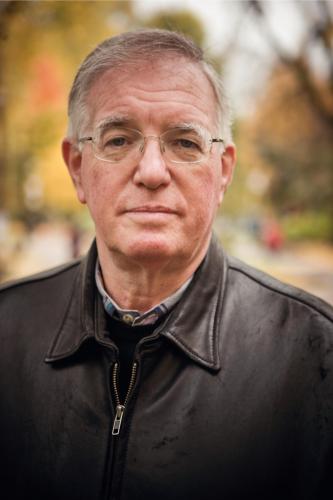 May 21 at 5 PM we plan an in-person author event with New York Times Bestselling author Phil Margolin for  the latest in his Robin Lockwood series, The Darkest Place.   Phil is a great raconteur; he always puts on a good show.  This is our first in-person event in 2022 and we are so glad it is with Phil Margolin.  We are grateful to Phil Margolin for his generosity, excellent mysteries, and fun presentations.  Sunriver Books & Music will be closed during the presentation.  Purchase of The Darkest Place is required to receive a free ticket for admittance to the event.  Space will be limited to 21 vaccinated audience members.  There will be drawings for prizes.  Contact sunriverbooks@sunriverbooks.com or stop by Sunriver Books & Music about purchasing The Darkest Place and tickets to attend the presentation. We thank you for understanding as we resume in-person events cautiously.

A childhood fascination with Perry Mason led Phil Margolin to a career as a criminal defense attorney who handled death penalty cases and argued before the US Supreme Court.  He brings this background, with a rich knowledge of criminal law, to his Robin Lockwood series, legal thrillers at their best!

The Darkest Place has Robin Lockwood facing her greatest challenge.  Robin is tough, made her way through Yale as an MMA fighter and keeps in practice.  Smart too, she is known for coming up with innovate defense strategies that win in court.  Courageous, sometimes more than she should be, as she is willing to put herself in physical danger to face down the bad guys.  But sometimes, no matter how tough, smart, and courageous, fate throws a punch that is a knock out.  Robin’s world implodes as she faces a situation she cannot control, now she has to pick up the pieces.

Judge Harold Wright cajoles Robin into defending Lloyd Arness, a rapist no lawyer wants to defend, someone so reprehensible that being in the same room makes a person feel slimed and in need of a shower.  This isn’t something Robin wants to tackle, but she believes strongly in everyone’s right to competent counsel and succumbs to Judge Wright’s persuasion.  It is a choice she will regret the rest of her life.  In the aftermath, Robin goes back to Elk Grove, the small Midwestern town where she grew up.  Here, while surrounded by her mother and brothers, she will have to decide how to face the future.

Meanwhile, detectives Carrie Anders and Roger Dillon are investigating the death of Joel Loman, a slippery rich guy long on enemies and short on friends.  Numbered among those who are happier with him dead than alive is his widow, Marjorie.  They were going through a nasty, contentious divorce.

As the days go on, Robin’s interest in the world outside her mother’s home starts to regenerate.  She is well known in her small town as a top notch, big city attorney, a hometown girl who made good.  When a local lawyer gets a case way out of his comfort zone, he asks if she would help.  Marjorie Loman was a surrogate for a local couple, Caleb and Emily Lindstrom.  She had signed a binding contract, but after the birth she changed her mind, culminating in assaulting Emily Lindstrom and kidnapping the baby.  Marjorie was living in Elk Gove under an assumed name.  As the trial progresses, Robin learns that Marjorie is wanted in Portland, Oregon, Robin’s home city, for a far more serious crime.

The Darkest Place is full of twists and turns, lots of interesting characters, and a clever ending!

The first in the Robin Lockwood series is The Third Victim.  Whisper Lake is a small community in rural Oregon where the population swells in summer with the owners of vacation cabins.  Winter it is deserted and quiet.  Caleb White is shocked when a woman stumbles out of the woods in front of his vehicle, disheveled, blood caked, mud covered, and incoherent. He takes the woman to his cousin, a local cop.  Meredith Fenner was held in a remote cabin and repeatedly tortured.  She bonds with Detective Harry White, relying on assurance she is safe now.  Meredith was abducted in Portland; a powerful attorney, the owner of the cabin, is the prime suspect.  The case against Alex Mason is convincing; Meredith identified his cabin, there is physical evidence inside, and the man’s wife attests he is sexually sadistic.  He can afford the best; he knows Regina Barrister is as good as it gets.

Robin Lockwood will be helping with the defense.  Robin was clerking for Oregon Supreme Court Judge Stanley Cloud when she was offered the job, it was an easy choice. Regina is her hero, a role model for the younger woman.  At times watching Regina, Robin feels fortunate to be learning from the best, but then there will be odd things, erratic behavior that makes her nervous.  Devious twists that will keep you guessing to the very last page, a masterful  puzzle.  However the heart of this story is the bravery of a woman at the top of her game realizing something is not right in her thought process.   Margolin shows these two incredibly strong women, Regina and Robin, one at the pinnacle of a career she loves, the other just getting started and filled with bright promise facing difficult issues with grace,

Perfect Alibi is second in the series.  A well-regarded attorney is brutally murdered, when suspicion falls on his equally popular partner, Robin Lockwood is called to defend. A young woman from a background lacking in financial wealth is raped by a popular athlete, on his way to a brilliant career, from one of Portland’s wealthiest neighborhoods. Robin is hired to represent the woman in a civil suit for damages.

Margolin’s years as a successful lawyer, arguing death penalty cases before the Supreme Court, is evident as he takes the reader inside the busy office of a highly capable attorney. With quick, sharp sentences he moves the cases along, Robin delving relentlessly for the path best suited to meet the needs of her clients while adhering to a strict moral code. Fascinating. Lots of fast paced action, multiple murders, and an intricate plot. Margolin has a gripping thriller that also touches on such serious topics as reliance on forensic evidence, the difference in the way societal classes are treated and bullying. And, oh boy, does he ever have the twists and surprises! Great reading.

A Reasonable Doubt has mystery, magic, and a complicated puzzle.  Robert Chesterfield is a master magician with a posh British accent, but not a nice guy.  He was charged with killing two people, he walked because he hired the best, attorney Regina Barrister.  Known as the sorceress for her brilliance as a defense attorney, Regina effortlessly left the prosecutor in tatters, her client cleared of the crime.

Robin Lockwood, Regina’s protégé, is contacted by Chesterfield because he may need a criminal attorney on retainer in the near future.  Robin isn’t thrilled with the client, but she has a lifelong fascination with magic, so she accepts.  Invited to his palatial home on the Oregon Coast for a special showing of his new illusion, the Chamber of Death, Robin is present when the magic goes awry and the magician disappears.  His timing is good, he leaves behind a string of debtors, including a mobster who takes running out on a debt as a sign of disrespect.

Years later, the Portland papers announce the debut of Robert Chesterfield’s Chamber of Death at the Imperial Theater.  The illusion again ends differently than anticipated.  This time Robert Chesterfield is not going to escape, murdered in front of a full theater of people with no one the wiser as to who put an end to the magician.  In the audience are a plethora of Chesterfield’s enemies, and the two defense attorneys.

A Matter of Life and Death has all of the surprise twists we expect in any book by Phil Margolin. Robin Lockwood is tough as nails, and she needs to be, in her latest case defending a boxer who has all the evidence stacked against him! The DA has a wheelbarrow full of evidence, all pointing to her client’s guilt.  But Robin believes Joe Lattimore when he says he didn’t kill Judge Anthony Carasco’s wife. Joe Lattimore was homeless and living rough with his wife and child when he was recruited for a job that would put a roof over their heads.  Taking that job is the first step down a slippery slope into a living nightmare that might just conclude with the death penalty.

Robin teams up with Amanda Jaffe, a dream team of defense lawyers. Can they find a way to prove Joe’s innocence despite the mountain of evidence against him? Read it and find out, this legal thriller will keep you turning pages. Margolin uses the Portland settings beautifully. I thoroughly enjoyed this latest in the Robin Lockwood series, especially with Amanda Jaffee included too!

Join us for an entertaining evening!  In addition to being an accomplished attorney and New York Times Bestselling author, Phil Margolin is also a really nice guy. In 1970 he served in the Peace Corps in Liberia, Africa. While attending law school, Phil taught junior high school in the South Bronx.   Today he travels widely and stays in touch with the world.  Phil Margolin is also a champion of Independent Bookstores!

A Matter of Life and Death: A Robin Lockwood Novel (Mass Market)