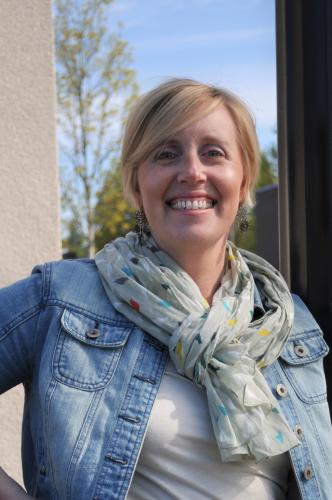 What better way to celebrate the beginning of the Holiday Season than with Kate Dyer-Seeley writing as Ellie Alexander?  Her delightful series set in Ashland Oregon and Leavenworth Washington are just the ticket! Saturday November 16 at 5 PM Kate Dyer-Seeley returns for the latest in her mystery series.

A Cup of Holiday Fear is a love letter to Ashland Oregon, home to the famous Shakespearean Festival .  Set during the Christmas Season, it paints a picture postcard of the town decked out in all of its holiday finery.

Torte, the family bakery, is in full swing preparing cookies for the parade leading up to the Grand Illumination.  New recipes are in the works, and Juliet Capshaw is at the center of all the activity.  Recognizing the hard work her staff has contributed, not only in the holiday season, but throughout the year, she has arranged a fun evening in the holiday spirit.  Historic Winchester Inn hosts Dickens Feasts throughout the holiday season complete with a six-course meal, and, of course, Ebenezer Scrooge.  There will be singers in Victorian costumes, Santa and Mrs. Claus, and fun for everyone.  Well almost everyone, the murder victim is not going to have such a great evening.  Jules, along with Lance, will be trying to solve the murder and save the holiday season.

This is the tenth entry in the popular series, spend some time with Jules and her friends, it will put you in a holiday mood.  Clever mystery plot too.  Delicious recipes are included at the end.

Beyond a Reasonable Stout is set in a brewpub in Leavenworth Washington in November.  Octoberfest is over, the thousands of tourists have gone home, the residents are breathing a sigh and relaxing.  Or they would be, if a contentious election were not causing such a furor.  Town councilman Kristopher Cooper is running for reelection against Valerie Hedy.  Cooper is determined to make the town dry, shut down the sale of beer, thus eliminate the rush of tourists that overrun the quiet village especially during Octoberfest.  Sloan Krause, her boss Garrett Strong, her soon to be ex-husband Mac Krause are all involved in brewpubs, so the election means something personal to them. Leavenworth is known for its German theme and beer, without the beer businesses would close, the tourists that fuel the economy would not arrive, the whole culture of the town would alter, it would be a glum time for all.  Cooper has to be stopped.  And he is.  Murder ensues.

Prime suspect is April Ablin, dirndl clad German obsessed, self designated town ambassador.  Sloan is asked by Police Chief Meyers to keep her ears open and off we go!  Sloan and friends are involved in solving a case where everyone has a secret.

What I liked especially about this entry is the way Sloan is dealing with the effects of the dissolution of her marriage on her teenage son.  The kid is a charmer; thoughtful, kind, and smart.  Clearly this stems in part from the respectful way Sloan treats her son and the care she takes in his emotional wellbeing.

This is the third entry in a series set in one of the most picturesque Pacific Northwest locations.  The characters are likeable and there is a lot about the brewing of beer and pub culture.

Violet Tendencies is the second of her series set in Portland Oregon at Blooma, a wine bar and flower shop, after Natural Thorn Killer.  Britta Johnston and her aunt Elin have made the shop’s reputation on their fabulous floral designs. They are in the thick of preparing for Portland’s Rose Festival, a major event for the Rose City.  Abandoning the tradition of roses, Blooma’s float will use garlands of violets twined on a ten foot bridge constructed of grape vines in the Grand Floral Parade. Dark Fusion, a group of anarchists led by Sham, have been protesting the Rose Festival, threatening to disrupt events forcefully.  Tensions are high. Interactions between the Rose Festival officials and the protesters escalate culminating with a murder linked to Blooma’s float and discovered by Britta.  Her friend Officer Tomo Iwamoto and handsome Detective Pete Fletcher try to keep Britta away from their investigation but she will not be deterred.  There is an entertaining video of one of Kate’s presentations at Sunriver Books & Music including an appearance by Charla Hanson of Wild Poppy Florist. https://www.youtube.com/watch?v=R6B2TIDKwK0

Kate also writes an amusing series featuring Meg Reed, a journalist writing for an outdoor adventure magazine that sends her into precarious predicaments all over Oregon. Meg’s occupation is complicated by being a secret wuss, trying to hide from her boss a lack of outdoor acumen while also writing good stories. She has a penchant for finding dead bodies thus putting herself in peril. They are fun to read, especially with all the great Oregon settings.  The first in the series is Scene of the Climb.

Kate Dyer-Seeley always puts on a fun presentation!  She is friendly and welcoming, join us for a great evening with Kate!

Beyond a Reasonable Stout: A Sloan Krause Mystery (Hardcover)

The Pint of No Return: A Mystery (A Sloan Krause Mystery #2) (Mass Market)

A Cup of Holiday Fear: A Bakeshop Mystery (Mass Market)

Till Death Do Us Tart: A Bakeshop Mystery (Mass Market)

Another One Bites the Crust: A Bakeshop Mystery (Mass Market)

A Crime of Passion Fruit: A Bakeshop Mystery (Mass Market)

A Batter of Life and Death: A Bakeshop Mystery (Mass Market)

Silenced in the Surf (A Pacific Northwest Mystery #3) (Mass Market)

Scene of the Climb (A Pacific Northwest Mystery #1) (Mass Market)