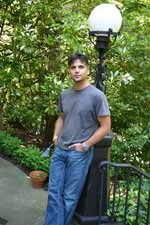 Saturday February 14th 2015 we have the honor of presenting Garth Stein at 5:00 PM at the SHARC Center. In his first novel since his 2008 mega hit The Art of Racing In The Rain, Garth Stein wields magical realism like an enchanted sword, somewhere Gabriel Garcia Marques is smiling.   We are happy to pre-order this title for you, it is scheduled to release September 30th 2014.

Trevor is 14 when his world implodes.  His parents are broke and estranged; their home in Connecticut gone.  Mom left for her native Cornwall and Trevor’s Dad is taking his son to their ancestral home in Puget Sound.  Trevor is sullen and withdrawn when he is gob-smacked by the sheer, immense beauty of the land of his forbearers. Jagged snow covered mountains, huge trees, the changing colors of the white capped Puget Sound, overwhelming.

This is Trevor’s first visit to the immense, neglected mansion of his Grandfather.  The plan is to place his Grandfather, in the early stages of dementia, into a reputable facility then sell the vast estate curing his father’s financial ills, setting free his enigmatic aunt Serena, and making possible a brighter future for himself (Trevor hopes also healing the breach between his parents).  Complications ensue. Trevor finds his aunt complicated and a bit dangerous.  Grandpa Samuel isn’t so straightforward either.  In the Northwest his family name meant power and wealth, in the early years the Riddells were timber barons, logging vast swaths of the pristine forests, all that remains by the 1990’s is the forested family estate Trevor’s father and aunt seek to sell.  What is our responsibility to family, to our ancestors, to promises made, to the land that embraces us?  Where does honor lay? Heady questions for a sad teenage boy.  Questions the other occupant of Riddell House waits for Trevor to face.  The Ghost of his great-uncle Ben resides in the old mansion too, bound there until an obligation is fulfilled.  Trevor confronts these issues alone, Mom is far away, and Dad is battling his own demons as secrets from the past press on him.  As Ben’s approaches to Trevor become more direct the teen realizes his faith must come from within.  We are all connected, the past, the present, those we love now, those who walked before us, all living with the consequences of the decisions made, all responsible to walk gently on the earth.

A Sudden Light may have a charismatic ghost but the story encompasses so much more.   It is filled with history of the Pacific Northwest, a wonderful work of historic fiction skillfully blending real events with imagined to give a compelling look at a majestic land. The family journey is epic, generations touching generations, the sins of the fathers visited on their progeny.  There is compelling mystery as Trevor uncovers the secrets haunting his family. When the obligations of the past meet the desires of the future in the hands of a confused teenage boy this novel shines.

The authors who live through history, those we remember, take us new places with each book.  Great Expectations and Bleak House share the wit and beautiful prose of Charles Dickens, but they are very different stories, with different characters, atmosphere and plots.  Over a century later Dickens is still a name known well by passionate readers.  Garth Stein’s body of work shares this trait, the stories are each unique, yet they all share the graceful prose he brings so seamlessly to the page.  I would be remiss if I did not mention Garth’s other novels in case you have not read them.

The Art of Racing In The Rain is an award winner and an International Best Seller, spending an amazing 3 years on the New York Time’s Best Seller List. Sometimes if you are very lucky fate gives you a special friend.  Denny’s friend Enzo will stand by him through some of the best and worst times of his life, his faith in Denny bone deep.  Enzo is a dog with a very old soul; he looks at Denny seeing all that is good, a man full of the possibilities of life. Denny has magic in his hands; a race driver with natural talent. Deft hands, hair trigger reactions, and ferocious courage can only take you so far. Life changes direction in a heartbeat.  Who knows what is around the next bend?  Denny’s heart change is Eve, a woman he loves with all his being.  Together they build a life in Seattle; Denny finds work in an upscale car repair shop.  Their family soon includes a cherished daughter. Life may be about to take another curve. Denny’s life turns down dark alleys, but Enzo is right by his side, always steadfast, ready to help, his belief in Denny unwavering.  The Art of Racing in the Rain is poignant, funny, and highly relevant to life; who we are, who we are willing to become, and what we will countenance to achieve our goals. There are life lessons on the pages; believing in yourself, really listening to one another, cherishing those close to you, and sometimes being willing to risk it all!

Enzo is such a beloved character that Garth Stein, a devoted father, wrote Racing in the Rain for adolescents, the story of a loyal dog who yearned to be a race car driver, and shared his adventures with humor.  It is a favorite of our young readers! Enzo Races In The Rain releases October 2014, a funny picture book for children, sure to delight.

How Evan Broke His Head and Other Secrets is another award winning story set in the Northwest.  Evan is a rock musician, thirty years old, still avoiding responsibility for his life, worried that he is a one song wonder.  Epilepsy complicates his life.  Garth Stein’s sister suffers from the disease, in his career as a documentary filmmaker he showed the struggle of those afflicted with epilepsy.  He brings this knowledge to the story of Evan with respect and empathy, showing a realistic glimpse.   Evan’s father is a noted surgeon, upset by his son’s drift less navigation of life.  His parents live in the quiet upscale Magnolia neighborhood of Seattle.  In his teens Evan had a child, a son he has never met.  The child’s mother has died; it is finally time for Evan to grow up.  The story moves from Yakima, to Seattle, to Walla Walla taking the reader into the music scene and into the life of a young man learning to be a father.  How Evan Broke His Head and Other Secrets  is about the choices we make in life, the consequences they bear, and whether we get a chance to re-write our life’s script.

Raven Stole The Moon blends the folklore of Garth Stein’s Tlingit heritage with the story of a Seattle woman whose son dies in a boating accident on vacation in Alaska. Two years after the drowning death of her son Robert, Jenna feels compelled to return to Alaska, the scene of his death.  Leaving her husband in Seattle, she heads north.  Garth uses the natural beauty of the landscape almost as a character in the story, making the reader feel they are on the journey right along with Jenna.  Feeling vulnerable and alone in her grief, Jenna’s journey must be to one of strength and connection with those she loves.  On the ferry to Alaska she is given a kushtaka charm of a Tlingit spirit.  Soon it will have greater significance for her.

Please sign up early to attend by calling 541-593-2525, e-mailing sunriverbooks@sunriverbooks.com, or stopping by Sunriver Books & Music.  Events with Garth Stein are a real pleasure!  He is not only a brilliantly talented author and a wonderful person, he is also a great entertainer!  We will have drawings for prizes and lots of fun! 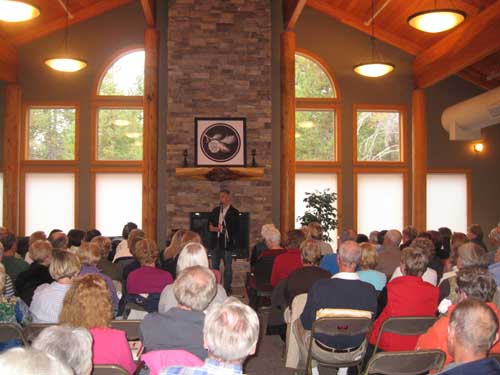 A Sudden Light: A Novel (Hardcover)

The Art of Racing in the Rain: A Novel (Paperback)

Racing in the Rain: My Life as a Dog (Paperback)

How Evan Broke His Head and Other Secrets (Paperback)

Enzo Races in the Rain! (Hardcover)