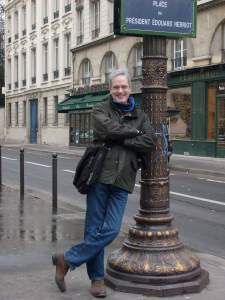 Dana Haynes research for his novels has got to be fun!  Because Sirocco goes to some outrageously gorgeous places!  Cyprus, Paris, Italy’s Lake Como, Spain, Switzerland, truly great settings.  Used in a wickedly clever thriller that will keep the pages turning.

Bombings, claimed by an Islamist terrorist group, have killed people in western Europe.  The CIA and Spain’s CNI have not been able to stop them, or get a handle on how to track them down.  A security company, Sooner, Slye, and Rydell (also known as Suicide Ride, but not generally to their faces) is also hot after the bombers.  With no success.  Michael and Katalin are doing okay, but have hit a dry patch when they are approached by someone known to Katalin with a proposition.  The money is fantastic, but they will be working for the one client Michael would rather not help.  Their brief?  Simple.  Just track down an Islamic terrorist group that has eluded the CIA, the CNI, and a private paramilitary security company, catch the head guys, and bring them in to stand trial.  Piece of cake.  Or not.

Of course, things quickly get more complicated and dangerous.  When the action moves to Spain and Katalin’s family is involved, it becomes personal and deadly.  Dana Haynes has outdone himself with a devious plot that will keep you guessing.  There are all kinds of situations for Katalin to demonstrate she still has the moves of a highly effective assassin and Michael to show off his prowess as an investigator.  This is a partnership that works!  One of my favorite characters from the first book in the series makes a reappearance too, Thomas Shannon Greyson.  And there are great new characters introduced.

As for the bad guys?  It is really a not a good strategy to upset Katalin Fiero Dahar, especially not with Michael Patrick Finnigan in her corner.  Not a good plan at all. But it is lots of fun for the readers to watch how this pair figures out the puzzle and takes care of business!

The first in the series, St. Nicholas Salvage & Wrecking, is also a rip-roaring thriller, filled with action. Michael Patrick Finnigan and Katalin Fiero Dahar, have the ultimate meet cute, with a twist, it involves them inflicting bodily injury on each other.  Not your usual meet cute, but nonetheless it works for them.  Then again, they are not your usual guy and gal, both tough as nails.  At the time Finnigan was a US Marshall and Fiero was a Spanish assassin, both in the Ukraine for a joint operation between the governments in an attempt to catch a notorious drug runner.  Finnigan, a by the rules sort of guy, and Fiero, definitely not a by the rules sort of gal, had different takes on what would be a successful outcome for the endeavor, as I said wounds ensued.

Six months later they both still wanted to fight the good fight but were disillusioned with their government jobs.  Recognizing their respective talents, they decided to get together and freelance.  Much of their work came through the International Criminal Court, on the qt of course.  This time they are after human traffickers, well connected and deadly.  But then, when it comes to deadly, Fiero has that covered.

This is a series that gallops through the pages, lots of action, a deadly hot babe, Fiero, and a guy willing to put it all on the line, Finnigan, for justice (at least their version of justice).  Great fun to read, and it is easy to cheer for Fiero and Finnegan.