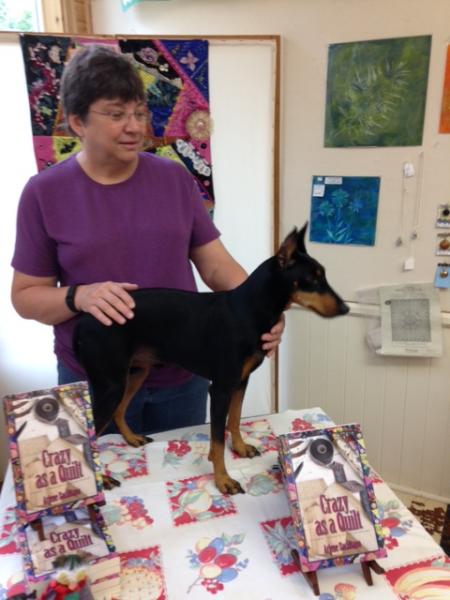 She is best known in Sunriver for her entertaining presentations on the day of Sunriver’s Quilt Show featuring her mystery series about a quilting guild set in the Pacific Northwest.  Hopefully, if Covid-19 is controlled by then and the Quilt Show is held this August, she will be here this year too with a new quilting mystery, as of yet, we don’t know.

Double Knit. Introduces a likeable cast of characters and a unique premise. Permelia thought her life was set, she raised eight children with her husband on their ranch, there was hard work but it was a good life.  Then she learns her husband is dating a woman in the same age group as her kids.  Worse still, the woman is pregnant and the feckless husband finds no reason to move away from their small community.  So, at a time in life Permelia thought her future was settled, instead she is moving several hours away to start over in Portland.

The city morgue is in a nice neighborhood of stately older homes with shops and restaurants close by.  A separate apartment on the upper floor is for rent, it has room for Permelia’s spinning, good light for knitting, and feels like it would be a peaceful place to live.  Her Bengal cat, Fenton (a delightful character!) will enjoy taking walks on his leash on the tree lined sidewalks. Two of Permelia’s daughters live in Portland, she brings them along to view the apartment, their reactions are starkly different.  Katy, the younger daughter, finds the apartment charming.  While Jennifer is horrified and begins a determined campaign to persuade her mother to move into an retirement facility.

No sooner does Permelia move in than she is embroiled in a puzzling murder (of course, this is a mystery!).  During the night a murdered man, Ed Anderson, is brought to the morgue.  In the morning a woman, Betty, comes searching for her missing husband, Eid FitzAndreu.  Assured no one by that name is in the morgue, she is about to leave when Permelia approaches with a knit hat she found in the parking lot.  When Betty spots the hat she faints, and away we go!