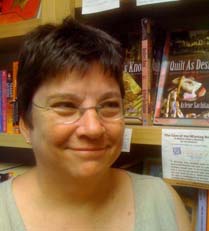 August’s first Saturday the Village is festooned with a dazzling array of beautiful quilts for Sunriver’s annual Quilt Show.  In celebration of this spectacular showing of local artistic craftsmanship, Arlene Sachitano will give a presentation Saturday August 1st at 5:30 on the latest in her quilting mystery series featuring Harriet Truman,Crazy As a Quilt. The series is set in the imaginary town of Foggy Point on the Olympic Peninsula near Port Angeles, a stunningly gorgeous northwestern setting.  The Loose Threads are putting up guests for a quilting retreat, but not all the guests have the same agenda.  Harriet’s guest will make her face a secret from the past.  Harriet’s main man Aiden’s guest has ulterior motives too; she used to be more than a casual friend to the handsome veterinarian.  When she is found murdered in his home, he is the prime suspect.  Harriet and the Loose Threads will have to catch a killer to keep Aiden out of serious trouble.

In A Quilt In Time Harriet and the Loose Threads quilting group are making bedding for an animal kennel local veterinarian Aiden Jalbert is setting up in the in the battered women’s shelter. Soon the shelter has another intimate connection to Harriet’s life.  Her friend Sara calls from the emergency room after being savagely beaten by her fiancé Seth. Sara balks at going to the shelter until she wakes up to find Seth dead in her bed.  Now Sara is a prime suspect and Harriet is once again on the trail of a killer. While Sachitano writes about serious subjects, such as battered women, she does so with a light touch achieving a mystery series that entertains while highlighting important topics.

Quilt as Desired, first in the series, introduces Harriet as she takes over her Aunt Beth’s quilt shop just in time for the murder of a quilter. Quilter’s Knot has Harriet solving the murder of an instructor at a quilting retreat. Quilt as you Go finds Harriet involved in a Civil War Re-enactment. When the dust settles one of the corpses is seriously dead. Most perplexing, he seems to have died twice. Quilt by Association has lots of intrigue. An African woman with a blue eyed baby comes to town looking for Aiden. Within days the woman is dead. The Quilt Before The Storm has Harriet and the Loose Threads busy making plastic tarps and sewing flannel rag quilts for the homeless people destined to bear the brunt of the fierce weather. However the homeless are vulnerable to more than the wild wind and floods, the evil among men is a greater threat. Someone is killing people in the homeless camp and the local police are stranded by a rock slide. Harriet and the Loose Threads will have to catch the killer. The books are full of quilting detail and warm, likeable characters.

Wintertime it is hard to attract tourists in Foggy Point, the town comes up with the idea of a sixties themed event, all peace and brotherly love in a bid to bring in visitors during the off season.  Make Quilts Not War has Harriet and the Loose Threads quilting group putting together an array of the dreadful polyester quilts, put on the sometimes embarrassing sixties fashion and sallying forth to deliver a memorable event.  It is not long before someone is shot dead right under one of the quilt displays.  The murder may have been random, or the killer might be after one of the Loose Threads whose secrets lead back to the sixties, secrets she closely guards.  Harriet’s love life is not running smoothly either.  For a man as sensitive, bright, and caring as Aiden, the local veterinarian and Harriet’s main guy, he is frustratingly clueless when it comes to the manipulations of his rotten sister who is determined to take over his life and fleece him to the bone.   Aiden might want to straighten up and fly right, Tom is eager to capture the role of Harriet’s main guy. Before the book is over there will be more competition for Harriet’s attention.

A Quilt in Time (Paperback)

The Quilt Before the Storm (Paperback)

Quilt as You Go (Paperback)

Crazy as a Quilt (Paperback)